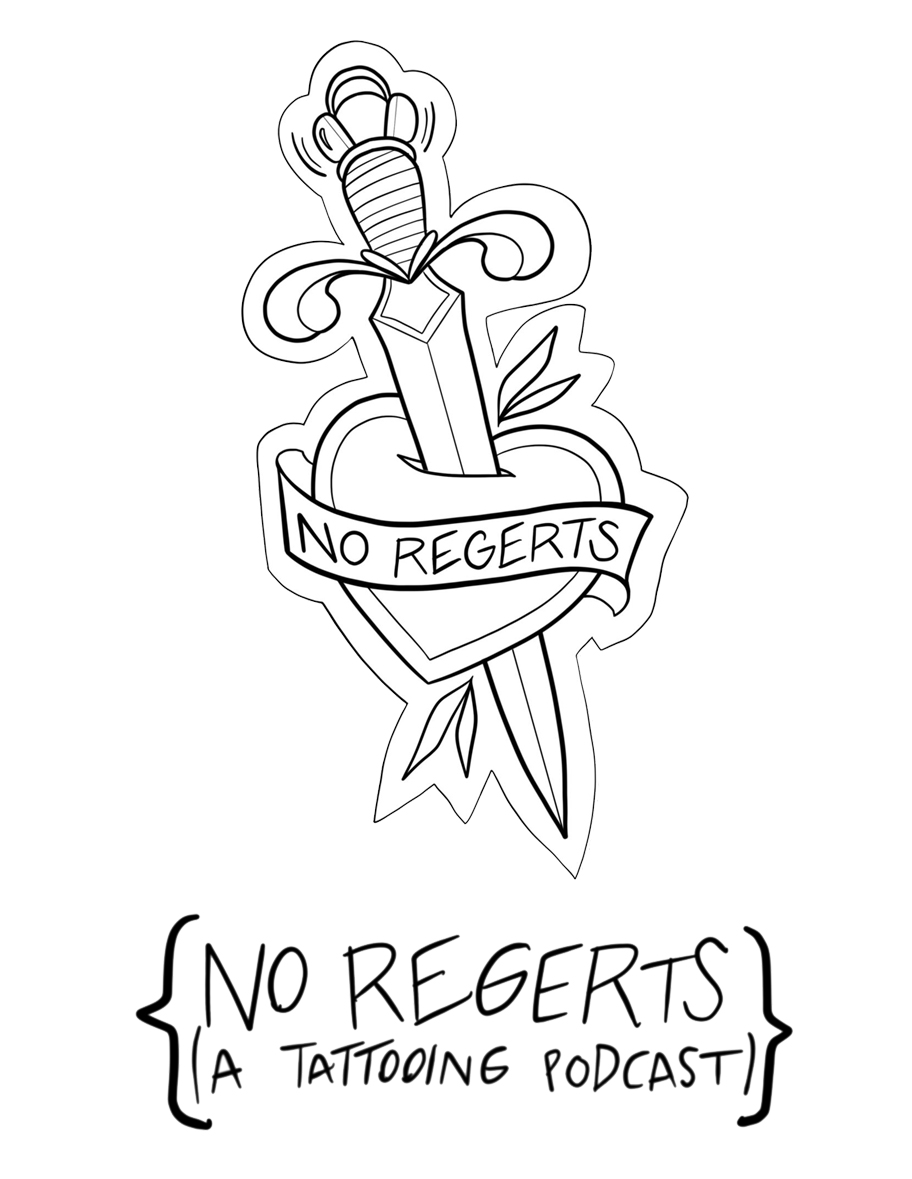 This episode we discussed some of the major gangs in the U.S. and their tattoos. Well, a picture is worth a thousand words, so without further adieu…

Here’s an example of a Crip tattoo. The BK stands for Blood Killer. As we said, most of their obsession lies with how much they hate their rival bloods.

Here’s an example of a Blood tattoo. The MOB is Member of Bloods. The PIRU refers to Piru street in Compton, and the corresponding PIRU street gang, which are considered the “original” bloods.

Ah, yes, the ole’ AB. Racist, violent, and murderous are the three words I’d use to describe them.

The 666 Shamrock can be seen below. In the episode we chatted about the need to simultaneously symbolize the devil and one’s Gaelic whiteness all in one tattoo. Here it is.

I can only assume this gentlemen did something to serve the greater good of the gang. He has the Parteiadler to prove it.

Don’t be fooled, it isn’t Aslan. This gentleman is a member of the Latin Kings.

I have decided this is the only gang that scares me as much as the Russian Mob. I’m just going to leave these here.

Oh, and here is the El Salvador Coat of Arms.

With all of the big budgets and experts on set, you’d think that Hollywood could do a better job at accurately depicting the act of tattooing, but nay. I, for one, am simultaneously disappointed and entertained. Let’s talk about the movie and TV scenes and what they get wrong.

This one is a doozie. Let us count the transgressions:

Ironically, Sylvester Stallone has been tattooed extensively and must know better. Here’s the clip:

Unfortunately I couldn’t find a clip of this scene, but it was wrought with solemn intensity and meaning. Jackie is a seasoned war vet getting a side piece of poppies on a chain of barbed wire. In the scene she sneaks out of her house, incognito in sweats and a hoodie, and asks her tattooer to add another poppy. Despite the flowers being about 2 square inches in area, her tattooer warns her that it will take a long time and asks if Jackie is sure that she can handle the pain. Jackie replies that she likes the pain.

Rib tattoos are no picnic, but the writers of this scene obviously don’t understand how long tattoos take. The tattoo in question:

This scene isn’t too bad actually. You don’t see any stencil put on, but let’s just assume they cut that scene. As awkward as the tattooer obviously feels, maybe the most unrealistic part of this is how well he’s taking everything so well – the entourage, Andy’s de-robing, and the very last minute design change. That tattooer is a champ.

So, full disclosure – I haven’t seen this movie. But Josh has, and he says that the Russian Mafia is no joke. From a tattooing standpoint, this scene looks legit! Obviously, they aren’t using your standard tattoo machine, but at least the dude is wearing gloves, and the tattoos themselves look pretty real.

Maybe the most unrealistic thing is how well he’s taking that direct drilling to his kneecap, but he is entering the Russian mob after all. (Turn on the closed captions if you want to understand what they’re saying.)

Believe it or not, we didn’t get our name from this infamous commercial, but we’d be remiss if we didn’t put it on our list. Fortunately for the tattooer here, it looks like that tattoo has been healed for quite some time. So, I guess she was just eating a candy bar and not tattooing at all.

I have nothing negative to say about this. I just love Moana and think it’s great that they featured traditional Polynesian tattooing in the movie.

And as promised, here is your bonus video, complete with ill fitting gloves and a message that we just can’t quite wrap our head around.

We hope you don’t hold the above video against Chris Isaak. In fact, go watch the original video of his original song for some actual sexiness.

That’s all we got for this time around. Thanks for listening, and be sure to subscribe to No Regerts: A Tattooing Podcast on Apple Podcasts or wherever you get your podcasts.

You may be surprised to find out that you don’t actually own your tattoo. You own your skin and the ink, but the design? Nope! This week we talk about tattoos as they relate to copyright and copyright infringement. We introduce the listener to the concept of intellectual property, then down the rabbit hole we go. Because tattooing in general is so derivative, and every artist ever has tattooed copyrighted material, we quickly enter murky waters from which there is no escape. Please don’t sue us!

Find us on Apple Podcasts, Spotify, Stitcher or Google Play!

In our last episode, episode 23, we talked about realistic color tattoos, and their longevity, as well as tips on how to get you some good portraits. Here are some examples of the good, the bad, and the ugly.

Our first example is a fresh tattoo of our friend Ron Burgundy. The issue with Mr. Burgundy is the lack of contrast. The blue background is close in tonal value to his face. His face has a lack of contrast as well – in a portrait that will last, sometimes the face might seem a little too bold when it’s fresh. This tattoo is likely going to look very washed out and hard to make out when it heals.

Here’s a good example of a face that looks pretty bold in color, but healed wonderfully:

Here’s a similar example to Ron Burgundy. You can see the lack of contrast and the light background and how healing didn’t treat it well:

And now for some healed tattoos that had all of the elements for a good color realism piece: contrast, bold colors, and even an outline or two.

Thanks for listening and we hope this was a good companion for episode 23!

The Russians are Coming!

Here is your visual companion to Episode 17, From Russia with Love.  We hope that you enjoy these tattoos as much as Leah does:

If you enjoyed this episode, let us know, and maybe we’ll keep doing more of Leah’s Top Five lists.

As always, thanks for listening. We appreciate you guys!

What’s the deal with tattoo conventions anyway? I got you.